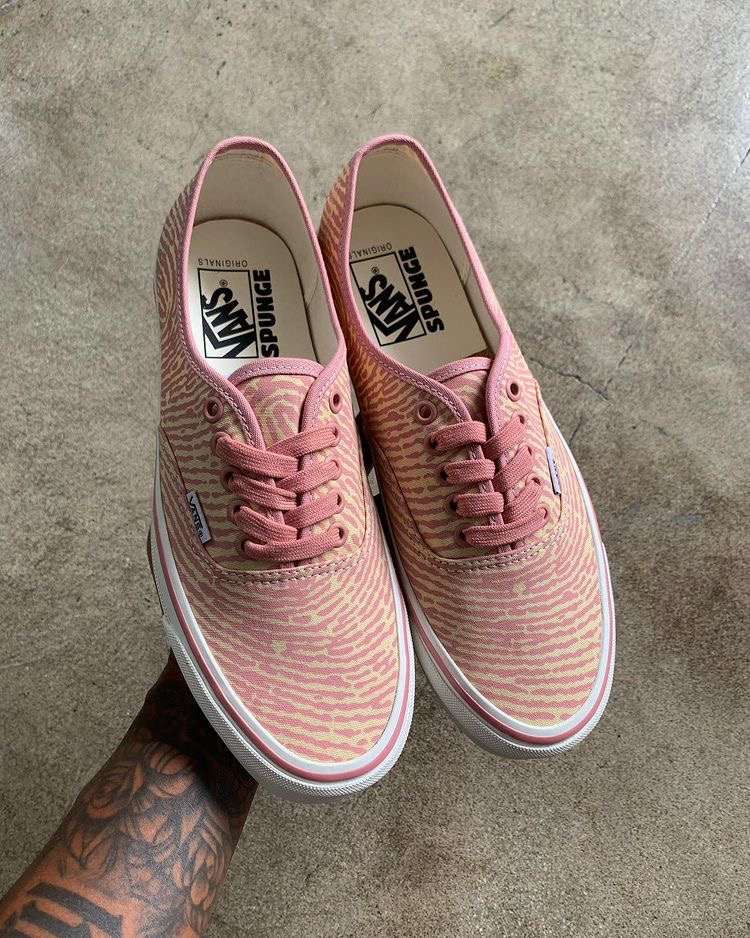 A week ago, the famous American designer Salehe Bembury revealed that he had partnered with VANS, through his brand SPUNGE, to reimagine the cult silhouette Authentic. After a first « Yellow/Blue » colorway (article available HERE), Salehe Bembury has just posted a « Yellow/Pink » version on his Instagram account.

The former Versace, elected designer of the year 2020, started the year 2021 by announcing the launch of his brand named SPUNGE. For his very first footwear collaboration, he teamed up with the legendary California label VANS. As a symbol of starting point, the designer chose the very first silhouette released on the day of the creation of the VANS brand, the Authentic, to launch this collaboration.

Like the « Yellow/Blue » colorway, the classic sneaker is covered with Salehe Bembury’s signature touch : the fingerprint pattern. It’s found all over the canvas upper in a combination of yellow and old pink. To affirm the look, the lining, laces and eyelets, as well as the band around the foot on the upper midsole appear in a matching pink color. The Salehe Bembury touch also stands out on the insole with the VANS/SPUNGE co-branding : it’s made with cork. The whole is based on a white midsole and a traditional gum outsole.

The pair comes in a special box with the famous fingerprint pattern and the logos of the 2 associated partners.

According to the evocative « soon, soon, soon » comment from Vans under the designer’s post, the SPUNGE x Vans Authentic « Yellow/Pink » should be released very soon. It should be available on Salehe Bembury’s brand website beaspunge.com. We’ll keep you posted on the official details, so stay tuned !