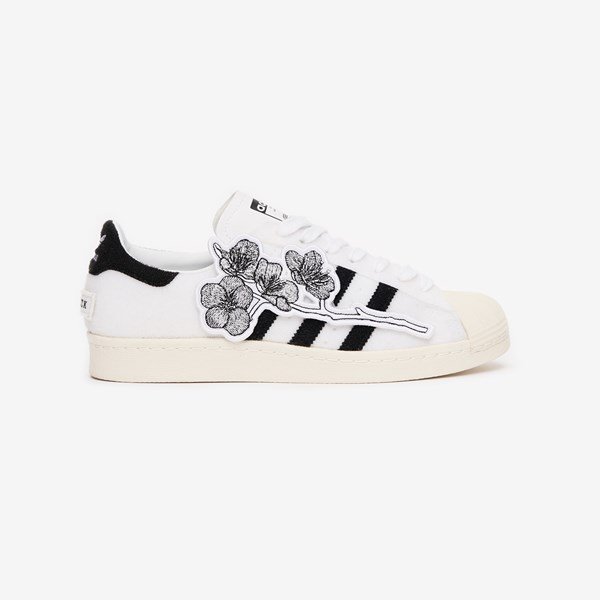 The renowned Swedish retailer Sneakersnstuff continues its successful partnership with the German giant adidas. After adding its personal touch to the avant-garde Ultra 4D silhouette (article available HERE), SNS has reworked an iconic model that celebrated its 50th anniversary in 2020, the Superstar. This new collaboration is called « Kinenbi », meaning « birthday celebration » in Japanese.

This special edition comes in a classic black and white aesthetic. However, the usual composition is replaced by a velcro construction. The repositionable overlays present 2 floral illustrations in black and white. They are of imposing size and can decorate the side panels where we find the emblematic Three Stripes in black. To complete the design, 2 other velcro patches of the small badge type have been developed. They bear the words « SNS KZK » and « KINENBI », also in black on white. The adidas and SNS brandings appear respectively embroidered in white on the right and left black heel tab. The inverted brandings adorn the black insoles in gold and white leather tongues. To affirm the collaboration, the retailer’s name SNEAKERSNSTUFF is embroidered in black instead of the legendary SUPERSTAR, above the 3 side stripes. A shell toe and an a sole in cream color add the finishing touch.

The letters « KZK » near to SNS on the repositionable badge can match the Japanese fashion designer Kazuki Kuraishi, the founder of the THE FOURNESS clothing line. He has already worked with adidas, and a rain jacket with floral patterns, reminiscent of the velcros, appeared in the lookbook.

The SNS x adidas Superstar « Kinenbi » will be released in the coming days or weeks exclusively at SNS, in stores and online. Stay tuned !