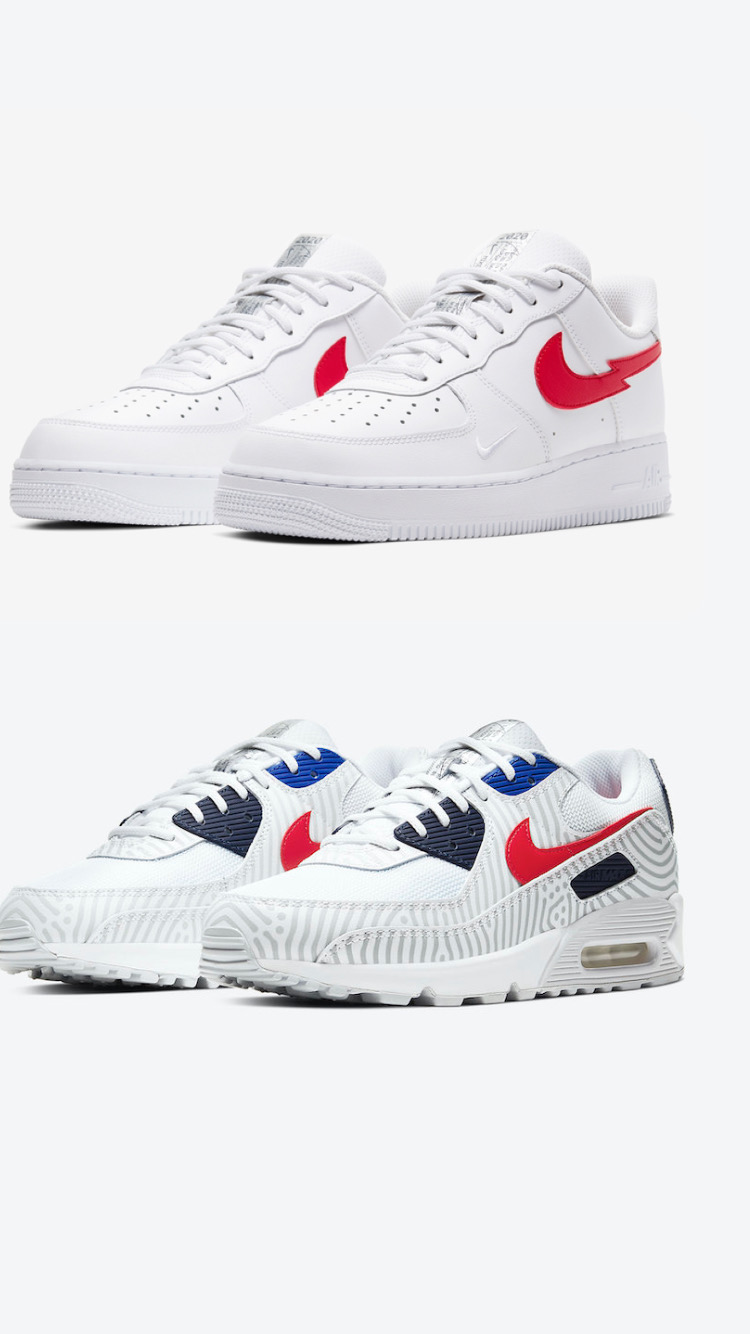 After introducing a Nike React Element 55 alongside the Air Jordan 1 Mid and the Jordan Air Max 200, the Beaverton-based giant is expanding its « Nike Swoosh on Tour 2020 » collection to include a Nike Air Force 1 Low, Air Max 90 and Air Max Plus.

The European Championship of Nations, commonly known as the EURO, is scheduled to begin on June 12, 2020. Due to the global health situation, the sixteenth edition of this football competition has been postponed. However, the equipment manufacturer Nike has maintained the publication of its collection referring to European cities. Various silhouettes named « Euro Tour » are presented to us.

The pair consists of a white smooth leather upper with a red side Swoosh cut off, reminiscent of a lightning bolt. For attention to detail, a mini Swoosh is embroidered in tone-on-tone on the white mudguard, and on the heel tab, the Nike Air branding appears in blue. In reference to the EURO, we find a silver stripe on the white tongue, the names of the host cities of the competition are written in blue, and the year 2020 joins the Swoosh. To finalise the design, the red insole features a print of the globe and a lightning-fast Swoosh, like the one on the side of the shoe. The whole is based on an all white sole.

The pair consists of a white mesh upper with reflective 3M zebra overlays. A touch of contrast is provided by the University Red side Swoosh, the night blue and royal blue eyelets and the night blue heel tab. As on the Air Force 1 Low, we find a silver stripe on the white tongue with the names of the EURO host cities, coupled with the branding and the year 2020. The insole is also identical. To complete the design, the whole is based on a white sole with the Air unit in the same colour.

The pair consists of a zebra, red and silver mesh upper graphic with touches of black. The colour black is also used to define the laceguard, laces and tongue branding with a red insert. Unlike the previous Euro Tour silhouettes, the insole is black with the red globe and flash swoosh. On the other hand, we find the same silver tongue strip with the midnight blue inscriptions. Reflective 3M details appear on the tongue and the front of the foot. To harmonize the design, the mudguard and heel appear covered in silver leather while the toe is black. The whole is based on a black midsole with Air units of the same colour and a black and red outsole.

The Nike Air Force 1 Low, Air Max 90 and Air Max Plus, as well as the other « Euro Tour » pairs in the « Swoosh on Tour 2020 » collection are expected to be available in the coming weeks at selected retailers and on Nike.com.