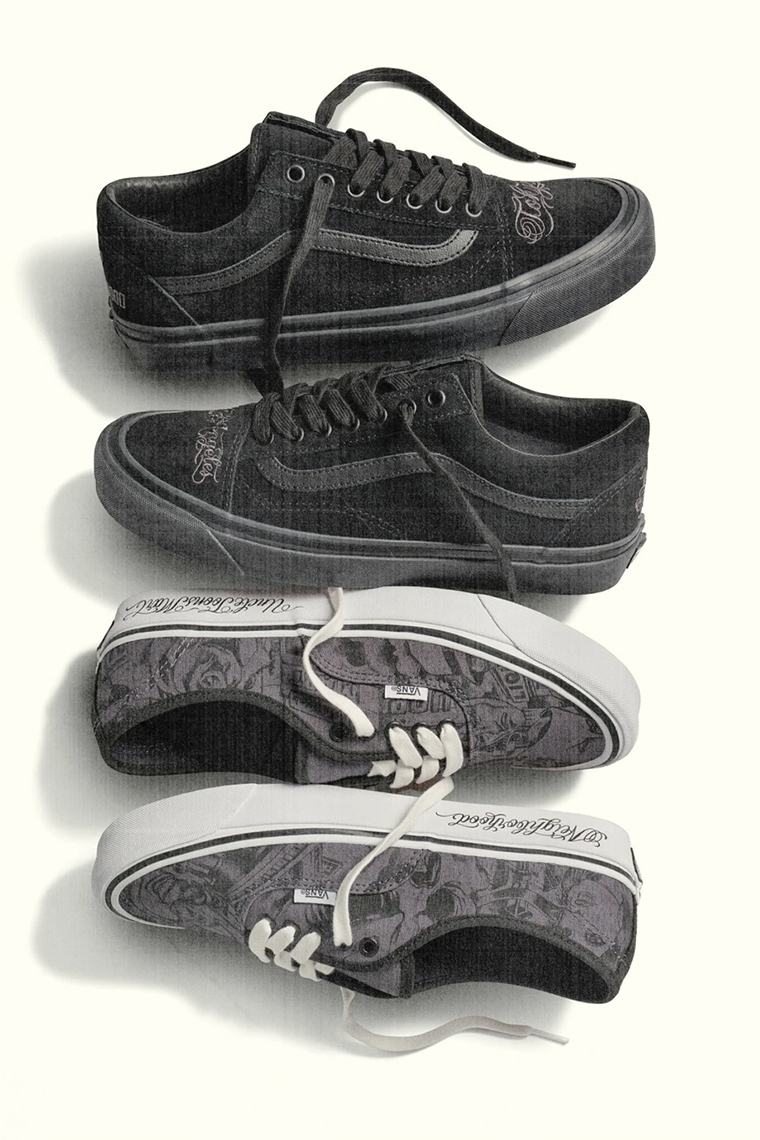 The Californian brand VANS has teamed up with Los Angeles artist Mister Cartoon and Japanese steetwear brand NEIGHBORHOOD to present us a collaboration that includes two pairs of shoes. This pack called « Uncle Toons Mart » is composed of a VANS Authentic 44 DX and a VANS Old Skool 36 DX.

Mister Cartoon and the NEIGHBORHOOD team are long time friends, they share complementary visions of design. They have finally been able to connect to offer us a first collaboration inspired both by the West Coast of the 90’s, with the spirit of « L.A Lowrider Life », and the street style of Tokyo. The name of the « Uncle Toons Mart » pack came from the imagination of Mister Cartoon. It’s the name he gave to a fictitious shop, in reference to the typical L.A. street liquor stores.

The pairs combine a design inspired by the lifestyle of Mister Cartoon with the quality of craftsmanship and attention to detail of the Japanese from NEIGHBORHOOD.

The Authentic 44 DX consists of a grey canvas upper with black prints referring to the street art visible in Los Angeles and Tokyo, as well as the tattoos of Mister Cartoon. To assert the worked side of the shoe, the lining and laces eyelets are black, and the insole features prints and a combination of brandings. The whole is based on the emblematic thick white sole with a black line. To finalize the design, we find the name of the Japanese brand finely inscribed in black in L.A 90’s style on the back side of the sole.

The Old Skool 36 DX is completely black. It features a suede upper with the leather Vans band on the side. The inner lining, tongue and laces are also black. We find the same insole as on the Authentic 44 DX shoe. On this elegant pair, we find the name of Tokyo and Los Angeles cities sewn with grey thread in L.A 90’s style on the toe box of each foot. This touch of originality is completed by the brandings applied in the same way on the heels. To assert the aesthetics of this pair, the whole is based on an all-black sole.

In parallel to these two pairs of sneakers, a textile collection has been developed.

The NEIGHBORHOOD x MISTER CARTOON x VANS Authentic 44 DX and Old Skool 36 DX « Uncle Toons Mart » will be available on 25 June 2020, on Vans.com and at selected retailers such as Caliroots, Overkill, Hanon or End.