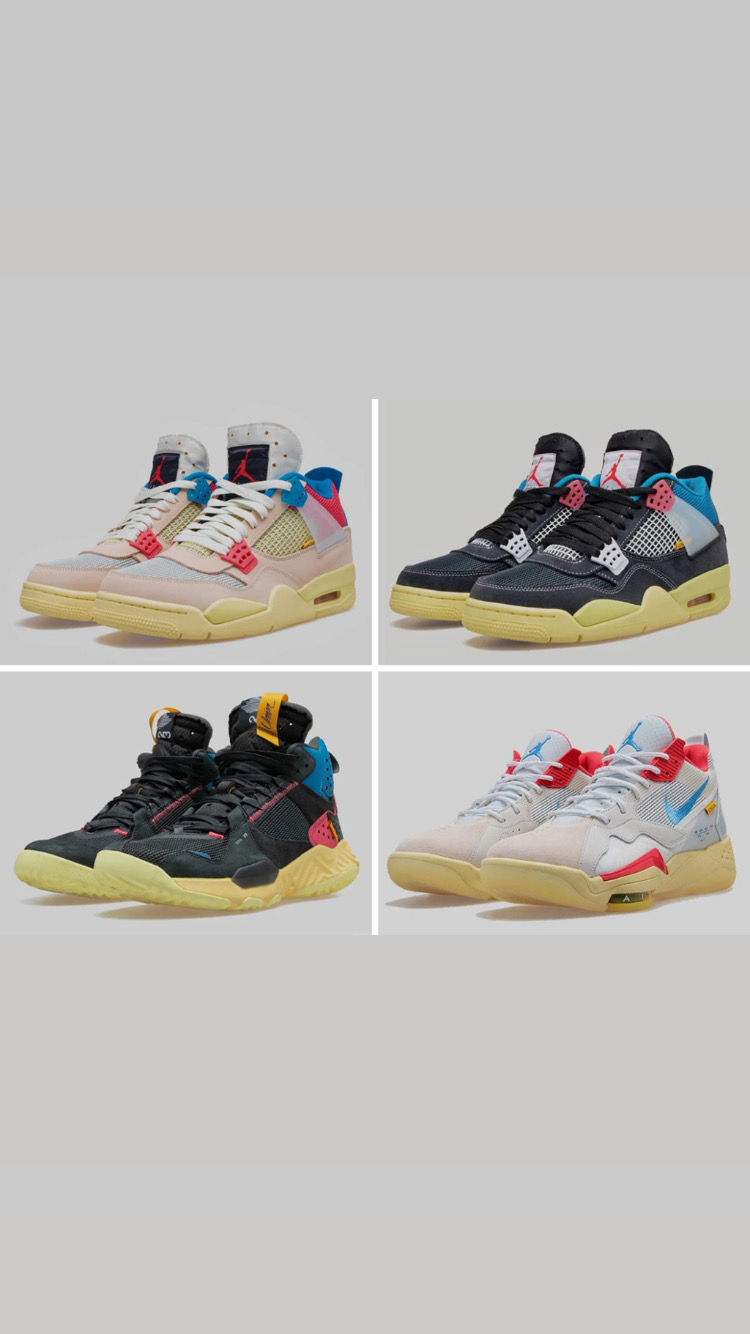 Chris Gibbs, the founder of the legendary streetwear shop « UNION » in Los Angeles, teased a future collaboration with Jordan Brand. After discovering mock ups of a Union x Air Jordan IV pack (article available HERE) thanks to the @py_rates_ account, detailed pictures of these two AJ4 UNION version have been presented : one in « Off Black/Brigade Blue-Dark Smoke Grey-Light Fusion Red » and the other one in « Guava Ice/Light Bone-Brigade Blue-Light Fusion Red ». Today, two other silhouettes have been added to this collection, the new Zoom’92 and Delta Mid.

The Air Jordan IV revisited appeared on the mock ups adorned with a very short tongue that had made people talk about her (and not only for good). Chris Gibbs announces that it’s only foldable, not too short and explains this choice. Younger Chris Gibbs liked to wear the Air Jordan 4 with the folded tongue that he attached to itself. As a nod to his trick, he decided to sew the flap with the same stitch pattern as on AJ1. This way, the stitch can be easily removed and the flap appears in its classic size. Another originality, a suede « Birkenstock sandals » style is used in overlays on the upper to give a warm and comfortable style.

The UNION x AIR JORDAN IV « Off Black/Brigade Blue-Dark Smoke Grey-Light Fusion Red » consists of a black upper with overlays in the same colour, with visible white stitching for a vintage look. It features semi-translucent TPU elements, dyed in white or red. To complete the design, the emblematic netting is white and the Jordan tongue and heel brandings are red. A contrasting touch is provided by the inner lining and ankle area in a deep blue colour. Also, the tongue appears off-white and a small yellow Union LA branding label is sewn on the side of the shoe. In order to finalize the vintage look of the pair, the whole is based on a yellow effect sole with the Air unit visible slightly red.

The AIR JORDAN Delta Mid strongly resembles this AJ4 « Off Noir ». The colours are taken up and placed on the same parts of the shoe. The upper is made of black mesh with tone-on-tone suede overlays. The blue colour is applied at the ankle and red touches appear on the heel counter. Red stitching on the laceguard and a yellow tongue pull with Union branding above the usual label complete the design. The whole is based on an imposing yellowed React sole.

The UNION x AIR JORDAN IV « Guava Ice/Light Bone-Brigade Blue-Light Fusion Red » features a white textured mesh toe box with pastel, iced guava overlays. The nettings covering the quater panel, the bottom of the laceguard and are pastel yellow, as well as the tongue. The TPU elements appear semi-translucent, tinted blue or reddish-pink. The latter colour is used to define the under ankle area and the Jordan heel and tongue brandings, adding contrast to the pastel look of the pair. This effect is completed by the inner lining and heel appearing in shades of blue. To finalize the matching and ensure the vintage design of the pair, the whole is based on a translucent yellowed sole with the Air visible unit slightly tinted red-rose.

The ZOOM ’92 is also dressed in this « Guava Ice » colorway. Unlike the AJ4, the toe box appears in guava colour and the overlays are pearl grey. There are white inserts, touches of red, as well as the Jumpman on the tongue and the side Swoosh embroidered in blue. The whole is based on a yellowed sole with the Air unit, taken from the AM180, under the front of the foot.

A Union x Jordan Brand clothing collection would be released in connection with these sneakers pack.

The UNION LOS ANGELES x AIR JORDAN collection is scheduled for release on 29 August 2020 on unionjordanla.com. The price for the Air Jordan IV will be 230€ per pair. The prices for the Zoom ’92 and Delta Mid have not yet been communicated. Stay tuned …