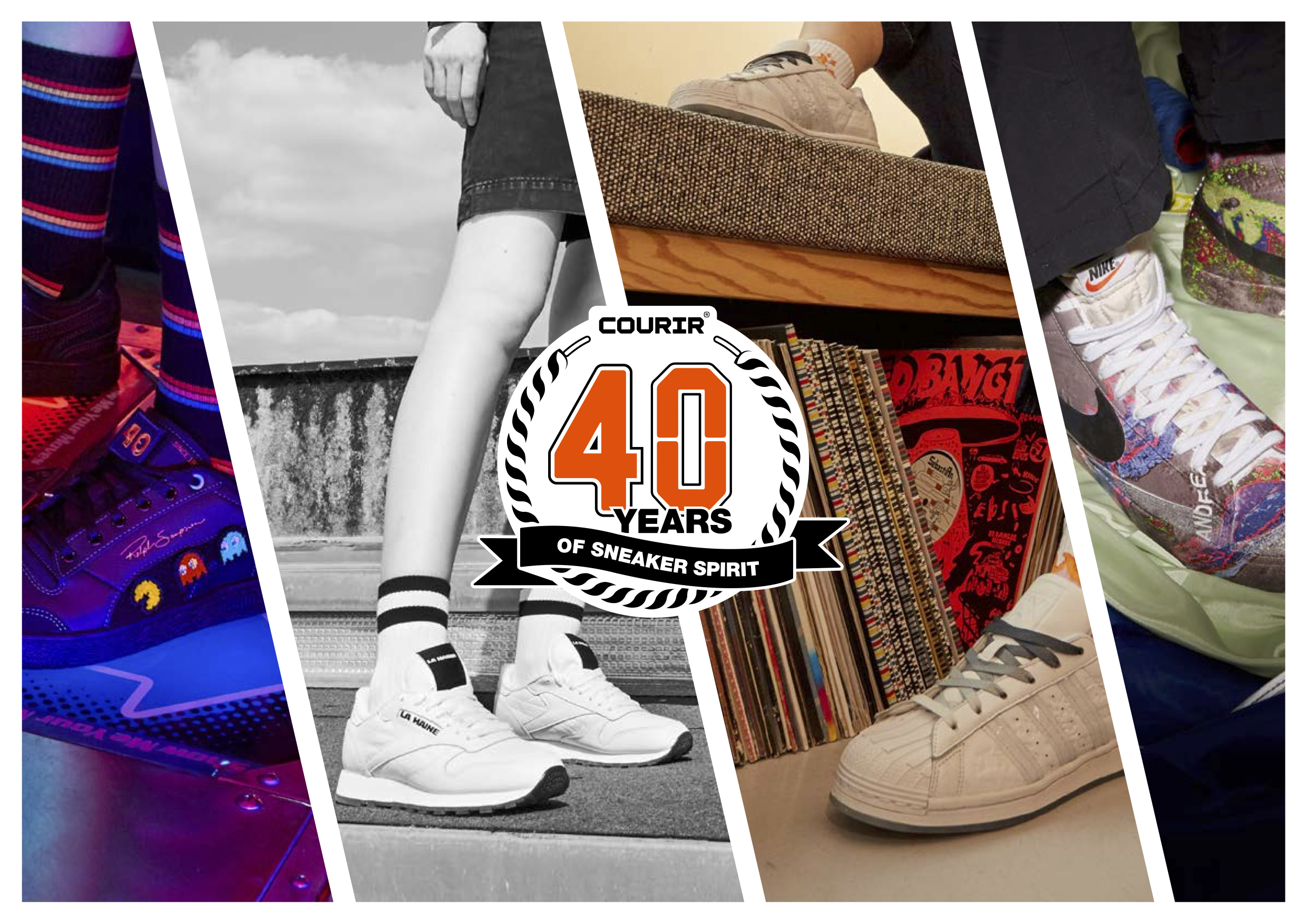 Founded in 1980, the number 1 sneakers brand in France COURIR celebrates its 40th anniversary during this month of October 2020. To celebrate this event, the French leader offers us a flashback of the last 4 decades of sneaker culture and fashion. COURIR has teamed up with 4 of its major partner brands to offer us an exclusive collaborative pair per week during the month of October, more precisely every Thursday.

The 80’s, 90’s, 2000’s and 2010 are each honored by a sneaker who will mark his decade and whose design is influenced by a strong and timeless theme : video games, cinema, music or fashion.

The Japanese video game is also celebrating its 40th anniversary this year. So it was only natural that Courir and Puma joined forces with BANDAI NAMCO Entertainment to design a sneaker that perfectly represents the pop atmosphere of the 80s. This project was also developed with the help of Sébastien Abdelhamid, an influential personality in the world of journalism and gaming. The shoe is dressed in a black base with apparent blue stitching referring to the game’s maze. Bright yellow accents such as the signed silhouette name on the side of the shoe, the Puma logo on the heel and the arcade-style « Game Over » on the heel counter add cachet to the pair. Just like the Pac-Man game, the pair is meant to be fun. We find many interchangeable velcros in different colors, such as the Puma side stripes, the personalized tongue brandings for the 40th anniversary of COURIR and Pac-Man, as well as the 4 famous enemy ghosts : Blinky, Pinky, Inky and Clyde. The yellow insole, the colorful top laces eyelets and the black midsole complete the design. The whole is based on a black outsole with red, blue and orange circular parts, and a pink badge under the middle of the foot.

This French film celebrates its 25th anniversary this year and collaborates for the first time with a brand. The association with Reebok is obvious to pay tribute to this cinematic masterpiece, as the 3 young main protagonists of the film are exclusively wearing pairs of this brand. Director Mathieu Kassovitz participated in the conception of this collaboration. We discover 5 iconic pairs revisited in the spirit of La Haine : the Classic Leather declined in 2 black and white colorways, a Club C Triple White, a Club C Revenge white and black and a NL Paris. The latter has never been marketed before and has been entirely redesigned for the occasion from images of the film. On each pair, we find details paying homage to the famous French film, such as the Reebok logo replaced by « La Haine », the legendary « Jusqu’ici tout va bien » (so far, so good) adorning the back of the foot and the translucent outsole with the inscription « La Haine ».

To complete the tribute, a line of clothing was also created. It consists of 3 hoodies, 5 t-shirts, a tracksuit set, a windbreaker, a cap and two pairs of socks. Like the sneakers, these items are black or white and bear the inscriptions « La Haine ».

The label created by Pedro Winter represents the famous « French Touch 2.0 » so much appreciated in the musical world. To celebrate 40 years of COURIR, Pedro Winter has chosen the iconic Superstar in memory of one of the first collaborations with a music group, Run DMC. The founder of Ed Banger Records wanted to bring in Michaël Dupouy from the MJC agency to re-imagine this shoe. The Superstar appears entirely white. The iconic rubber shell on the toe box is slightly reworked to look like a piano keyboard. Simple and minimalist in appearance, the premium white leather upper of this shoe is in fact adorned with precise and meticulous details. Thanks to an embossing technique, the smooth surface gives way to an all-over of logos of the label’s artists : Breakbot, the late Dj Mehdi, Mr Oizo, Justice, to name but a few, subtly appear on the entire upper. Contrary to the classic iterations, the emblematic 3 adidas lateral stripes and the top of the heel are transparent here. To complete the design, the white insole is adorned with a dark grey print joining the Ed Banger and adidas logos, and the laces come in a gradient of color from white to dark grey (a completely white set will also be delivered with the pair). The whole is based on a white midsole and a translucent outsole under which a dark grey pattern of Ed Banger logo is visible.

Andrea Crews founder Maroussia Rebecq is a pioneer of upcycling, the « top-down » recycling method that aims to transform materials intended for disposal into quality products. Through this project, Maroussia Rebecq wishes to convey a strong message : young people must unite around great contemporary values such as respect for the environment while projecting themselves positively into the future. This shoe is adorned with a singular and multicolored design. This colorful and disorganized pattern refers both to pollution and partying, as if to mark a striking contrast between the present desires of young people and their future struggles. To elaborate this design, Maroussia Rebecq used an artisanal technique mainly used in the discipline of tuning : hydro-dipping. Each shoe is soaked in a particular liquid and comes out with a unique pattern, specially developed for this project. This sneaker dressed with a brown base, is therefore decorated with different patterns and bright colors (pink, purple, yellow, green). The side swoosh is completely black and brings a touch of contrast to the design. The brand « Andrea Crews » appears in white randomly on various parts of the shoe. A classic Nike tongue label and white laces complete the look. The whole is based on a white outsole.

The celebration of 40 years of COURIR will start on October 8th with the release of the Puma Ralph Sampson low 80’s Pac-Man.

On October 15, the 5 Reebok 90’s La Haine models will be available, as well as the textile collection.

On October 22nd, it will be the turn of the adidas Superstar 2000’s Ed Banger to arrive on the market.

These sneakers will be available in all COURIR stores and on courir.com. Only exception, the Nike Blazer Mid revisited by Andrea Crews will be released in very limited quantities at the COURIR shop of the forum des Halles in Paris and on courir.com.

As a little bonus, each pair will be delivered in a special box with the theme that influenced the design of the collaboration.